Quote of the Day - Nando Parrado

"I think life is simpler than we tend to think. We look for answers and more answers. But there are no answers. Things happen in life, good things and bad. People say, 'Why did it happen to me?' Well, why not? Some people win the lottery, and others die in a car crash. It happens, and there is nothing we can do about it. The universe doesn't care what happens to you."

Nando Parrado, one of the 16 survivors of the crash of an Uruguayan Air Force plane in the Andes Mountains in October 1972

Here is the link to the complete New York Times story.

I find this to be a far more reasonable philosophy than the "Everything happens for a reason" school of thought. Extremely religous people see Parrado's philosophy as blasphemous. It resonates within me as "Truth." And the Truth usually isn't about warm and fuzzy platitudes, or absolute certainty handed down from God/Allah/Buddha/Vishnu.
Posted by Mr. G at 12:13 PM 2 comments: Links to this post 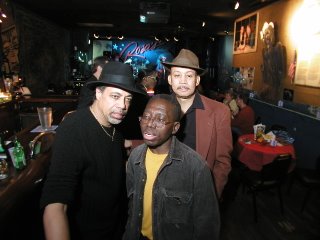 Caleb Dube was an unsung hero of the blues in Chicago. He died on Thursday, September 21. Caleb is in the middle in this picture, between blues harmonica player Billy Branch and the late, great jazz musician, Malachi Thompson.

Caleb was the husband of Katherine Davis, a superb blues singer. I have jammed with Katherine many times. She is a major pillar of the Chicago blues community - a big participant in the "Blues in the Schools" program and a fine performer that has lit up many a stage in Chicago and around the world. Caleb was a member of the Chicago Blues Festival committee. He was a brilliant man - PhD in Anthropology from Northwestern University in Evanston IL, an M. Phil degree in folklore, and a B.A. Honors degree in History and African Languages. He taught at DePaul University in the Department of Anthropology, and in the Department of Sociology since Fall 2002. Previously he taught at the University of Zimbabwe for eight years in the Department of African Languages and Literature. His areas of research were the production and political economy of African American and African popular culture. Caleb was in the middle of writing a new book about Chicago blues artists when he died. He taught courses in Chicago jazz and blues at DePaul University; his PhD dissertation at Northwestern was focused on the Chicago jazz and blues culture. He had a passion for the music. He was a published academic reseacher on a number of topics and was involved in many community and charitable organizations.

Caleb was politically active, too. Here is a snapshot of Caleb and Katherine with Barack Obama from a fundraiser at Rosa's Lounge on the West Side of Chicago (from 2003). 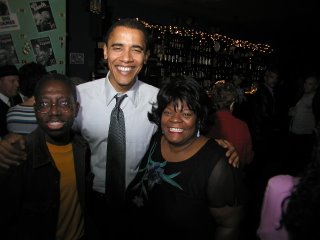 Caleb also was a member of the Zimbabwe Parliament in the mid-1980's.

Caleb came from Zimbabwe and many of his family members still live there. His funeral has been delayed to allow Caleb's Zimbabwe relatives to make the trip to Chicago. His funeral will be at 10:00 am on Saturday October 14 at Johnson's Funeral Home at 236 W. Division in Chicago. Johnson's is behind Sammy's Hot Dog stand.

This was a good man who died too soon. Hearts are broken.
Posted by Mr. G at 6:59 PM No comments: Links to this post

"These last five years have been horrendous," said Kathy Maloney, widow of Joseph E. Maloney. Joseph was a firefighter with Ladder Company 3 in Manhattan and he died during the attacks on the World Trade Center.

Kathy was speaking about her personal reality since she lost her husband, but the statement feels like it fits for all of Western civilization. But what is really interesting about the last five years is how little daily life in the United States has changed. The economy has been pretty strong, New York is booming, our prolific consumption of goods and services proceeds apace. The largest attack of the war on civilization didn't put the U.S. on war footing. There is no rationing, no war bond rallies, no calls for sacrifice. How deeply have we felt the pain of our fellow citizens who lost loved ones on that day?

The fine young people that are fighting and dying in Iraq and Afganistan are volunteers. There is no conscription so the majority of us don't have a direct connection to our fellow citizens who are fighting. The Iraq war looks like a massive mistake; Afganistan is suffering from inattention and is backsliding. And I am beginning to wonder if the terrorist threat is being pumped up, hyped for some reason. There were no deaths from terrorist attacks in the United States in 2005. There were 43,443 people killed in U.S. automobile accidents in 2005. Why should I be more afraid of terrorists than I am of automobiles?
Posted by Mr. G at 8:53 AM No comments: Links to this post

What if Coltrane Had Lived? 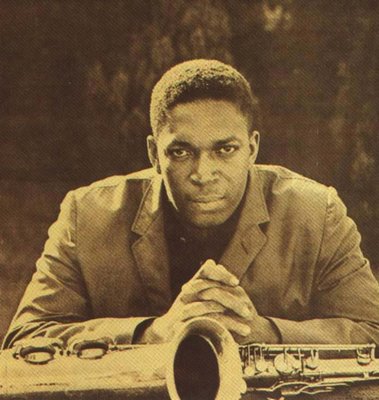 John Coltrane's birthday is coming up - September 23 was his birth date. I am spending quite a bit of time listening to Coltrane's music, and realizing that I don't have enough Coltrane music in my collection.

So If 'Trane was still alive, he would be 80 years old. He would be about as old as Oscar Peterson, Von Freeman, Tony Bennett, B.B. King, and a host of active musical octogenarians. Would he be mining the nostalgia circuit or still pushing the envelope?

John Coltrane struggled in his life, with heroin addiction, with racism, with the technical demands of the music he heard in his head. He was 40 years old when he passed - died of liver cancer, very suddenly (he checked into a hopsital one Sunday evening in 1967 and was dead the next day). His greatness had been visible since his early 20's, and I think it ould have grown if he had not been snatched away. If 'Trane had lived, I am sure the musical universe would sound different than it does today.
Posted by Mr. G at 8:40 PM No comments: Links to this post 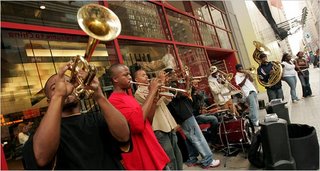 Back on May 18, 2005, I posted a message on this blog about the Hypnotic Brass Ensemble. These intrepid Chicagoans have relocated to New York - the group is based in Queens now. The reporters at the NY Times have noticed, and the Hypnotic boyz hit the first page of the Labor Day arts section of the paper. Here is a link to the article.

All of these young brass players are the sons of Kelan Phil Cochran, a Chicago brass player who had a massive number of kids. I love the Hypnotic Brass Ensemble and was sorry to hear that they have left their home town. Chicago's loss is New York's gain...
Posted by Mr. G at 7:00 AM No comments: Links to this post

Of course, this assumes that you know about Curtis Salgado. Unfortunately, many people do not, in spite of the role he played in creating one of the enduring pop culture icons of the late 20th Century, the Blues Brothers (more about this later).

I was visiting my brother in Portland, Oregon in early August. Portland is a fantastic city on many levels, but one thing that amazes me about the place is the depth and quality of its local blues scene. Robert Cray spent some time in Portland (he was from Spokane, I just learned). The great, unsung harmonica player and vocalist Paul deLay lives there. Stu Kinzel, Mel Solomon, Peter Dammon - the list is quite long. Most of these folks are not well-known outside of the Northwest. And perhaps at the top of the list is Curtis Salgado.

I have known about Curtis for a number of years. He inspired John Belushi to invent the Blues Brothers. Back in 1977 when Belushi was filming "Animal House" in Eugene, Oregon, he caught the 25-year old Salgado's act at some local clubs. Belushi became a fan, hung out with Curtis, and received a blues/R&B education. Many of the mannerisms and stage banter used by Belushi in the Blues Brothers schtick were lifted verbatim from Curtis. Belushi and Ackroyd made the money while Curtis toiled on in obscurity.

So I bought Curtis' most recent CD and thought it was pretty good. He has a fine, soulful voice and a great sense of phrasing. But to be honest, the CD didn't floor me. And he didn't play much harmonica - I had alway heard that he is a hot harmonica guy. But when I went out to Portland, I discovered he had a gig at the Trail's End Saloon in Oregon City (the bar is located at the end of the Lewis and Clark Trail). My brother and I decided to check him out.

Well. His live show blew the top of my head off. He sings with passion and spontaneity that is not captured on his CD's. And he played a ton of harmonica. As a harp player, I can assure you - this cat is very good. The bar was full of long-time fans (it looked a bit like a meeting of the Grey Ponytail Club). They howled and cheered and danced. Curtis knew many of them by name. It was a helluva scene, a great performance. Salgado laid it all down that night.

Now here is the kicker - Curtis has liver cancer. He announced it earlier this year. Generally speaking, the prognosis for individuals with liver cancer is not good. The best path toward survival involves a liver transplant. That is the path Curtis is trying to travel. Of course, this being the United States and Curtis being an independent musician, he is without health insurance. The cost of treatment for liver cancer (including the cost of a liver transplant) exceeds $1,000,000. So Salgado is touring while he is undergoing treatment to make money to pay for his treatment. Think about that! And I am a witness - this man is not performing like someone fighting a potentially fatal disease - he is roaring with energy and musical power. His musicial friends put on a fund-raising benefit for him, but the need is still great. If you love the blues and R&B music, buy this man's CD's, or even better, send a donation. Here is the info if you want to contribute: Mail contributions to the "Curtis Salgado Fund" US Bancorp, 2550 NW 188th Avenue, Hillsboro, OR 97124.

I'm pulling for this guy.
Posted by Mr. G at 5:21 AM No comments: Links to this post