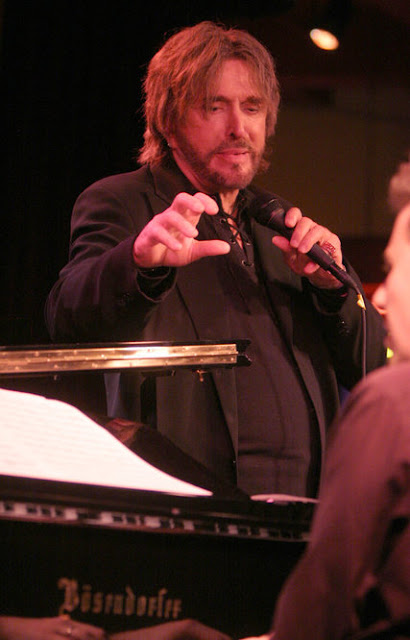 Mark Murphy died last Thursday, October 22, 2015.  He was one of the most influential jazz vocalists in history, but wasn't all that famous.  He is sometimes mentioned along with Betty Carter as one of the key vocal jazz innovators of his generation.  The current crop of male jazz vocalists, the Kurt Ellings and Kevin Mahogonys, are Mark Murphy's offspring. If there was any justice in the world, Mark Murphy's passing would receive more attention than the death of Michael Jackson or Amy Winehouse.  Murphy's singing touched something  elemental in the human experience.  Here is the New York Times obituary.

I never had the opportunity to hear Mark Murphy perform in person, which is a damned shame.  I am told that his recorded work doesn't fully capture the energy and creativity he poured into performance.  I can say that his recorded music had a significant impact on me, however.

So here is the story.

When I was a student at U.C. Berkeley, I played trombone in the university's jazz band.  I dated a female trumpet player in the band - she was a terrific person and I was lucky that she liked me.  I was an idiot, however, and found my attention captured by my trumpet-playing girlfriend's best friend, "CM." CM was a member of the "unattainable" group of women for me - stunningly beautiful, brilliant and with a terrific pedigree (her father was a local news anchor back when local TV news people were royalty).   CM graced me with a little attention since I was dating her buddy.  I was very taken with CM but kept my mouth shut about it since she was way out of my league and I didn't want to be seen as the jackass that chased his girlfriend's best friend.  I also knew that the chase would be futile and I was too much of a coward to try.

CM and I shared musical interests, but she was way cooler than me.  She gave me an LP for my birthday and said "Just listen to this. Listen."  It was "Mark Murphy Sings," his 1975 studio album.  I had never heard of Mark Murphy - I was into the usual (Coltrane, Miles, Bird, Basie, Ellington) and the slightly odd (Mingus, Roland Kirk, Curtis Fuller, Sun Ra).  When I put Murphy's record on the turntable, I was quite impressed.  He put together some very nice versions of "Body and Soul," "Naima," "On the Red Clay," "Cantaloupe Island" and "Maiden Voyage."   But there was one track that grabbed me, and destroyed me - "How Are You Dreaming?" a song written by Bob Crewe, the songwriter/producer that came up with "Big Girls Don't Cry" and "Can't Take My Eyes Off of You." The lyric and melody of this song are lush and charged with  longing.  It is still one of my favorite songs, and Mark Murphy delivers it with amazing technique and emotion. Murphy's version of this song wormed into my ear, went straight to my brain, then down into my heart.   Whenever I think about my lost love interests, or those women I longed for but lacked the courage to pursue, this song plays in my frontal lobe.  "How Are You Dreaming?" brings CM back into my memory, in her youthful glory.

Here is the link to the song.  If you are a sentimental fool like me, this will knock you over.