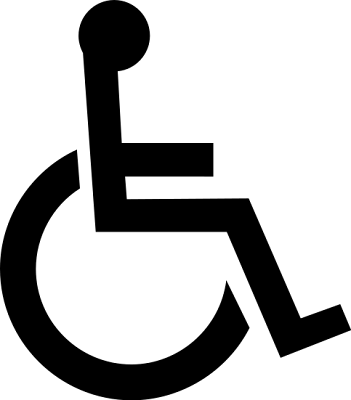 I felt a twinge in my knee last night and when I woke up this morning, it was still there. I decided to skip my workout to let my knee settle down. The last day of February was a little rough in Chicago - the rain that fell overnight turned to ice when the temperatures dropped around 2 AM. My neighborhood was a huge skating rink. I left the house for my morning commute, moving gingerly and feeling grumpy.

I made it to my local Metra stop and headed up the ice-covered, hazardous stairs. I looked up the stairs and saw a woman really struggling to climb to the top. She was of short stature, and it was clear that she was suffering from some sort of chronic condition - perhaps multiple sclerosis. She had a hard time lifting her feet to climb the stairs, and she was hauling herself up by pulling on the handrail. I offered to help her; she thanked me and asked me to carry her bag. She made it to the top of the stairs, we exchanged a few pleasantries and we headed off to face our futures.

I remembered that I have seen this woman a few times as I scurried to my train. She never caught my attention before. My busy-ness and self-involvement prevented me from truly seeing her. As I rode the train into work this morning, I felt awe and shame.

I was in awe of this woman's persistence. She is working while battling a condition that a non-afflicted person can't really understand. She was pushing through her infirmities to do what needed to be done. I think that she must be one of those exceptional people - a true optimist, who overcomes her challenges with hopefulness. Just an everyday hero, getting on with life.

And then I felt ashamed. I am one of the luckiest people on earth. It is deeply wrong for me not to feel gratitude and thankfulness every waking moment. A twinge in my knee and ice on the sidewalk - trivial matters!! I am not worthy to be the bag-carrier of the woman stuggling to climb the icy stairs. I owe her both an apology and thanks for opening my eyes to see past my own privileged existence.
Posted by Mr. G at 6:30 PM No comments: Links to this post I was ranting recently about the things that make me anxious; now I am going to talk about joy. Reggie Watts makes me feel joyful.

Just look at this guy! He has the wild hair going on, the multi-culti vibe, a hint of a smirk. When I look at him, I can't help but smile. He makes me glad to be part of the human race.

But his fun appearance is not the story. This fella is a towering talent. I first picked up on his mad musical skills when I ran into a Seattle band called "Maktub." (Digression: "Maktub" means "It is written" in Arabic). I heard Maktub's second album, "Kronos," in 2003 I think. I instantly became a fan, largely due to Reggie's awesome voice and improvisational abilities. He started doing stuff that didn't involve his Maktub bandmates, specifically solo excursions using a stereo digital multitack "loop" recorder. He decided to be his own band, using his voice to lay down percussion and "instrumental" tracks, then singing on top of those tracks. Check out one of his improvisations by clicking HERE. He also got into comedy and ultimately caught the attention of Conan O'Brien. Check out this piece that Reggie did for the Conan folks a while back.

So Reggie may be Bobby McFerrin's successor in the world of crazy vocalization. He may just be a very talented silly guy. I sure am glad to know about him.
Posted by Mr. G at 5:10 AM No comments: Links to this post 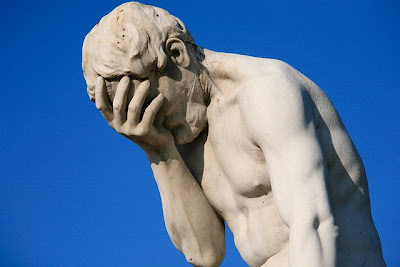 Here are things that are making me anxious today:


1. Tigers: I saw a billboard today that reminded me that there are only 3,200 tigers left in the wild. That doesn't sound like very many, people. In the early part of the 20th century, there were over 100,000 tigers. Tigers were voted "World's Most Popular Animal" by the viewers of the Animal Planet cable station, narrowly beating out the dog. So the world's most popular animal is on the verge of going "bye-bye." This makes me ANXIOUS.

2. U.S. National Debt: The total debt issued by the U.S. Government is about $14.2 trillion and will hit $15 trillion later this year if Congress raises the debt ceiling (and they will). Oh. My. God. $15 trillion of debt outstanding is equal to $48,100 for every citizen in the U.S. Enough money to buy 36,855,036,855 tickets to see Lady Gaga perform! It is impossible to imagine this much money, and don't we have to pay it back? This makes me ANXIOUS.

3. Iran: The news is full of reports about the latest demonstrations in Tehran and the latest brutal crack-down by the Iranian government and their goons. It is heart-breaking. I have known a few Iranians, and they are very cool folks; they really should be living in freedom. I don't think that the success of the Egyptians in chasing Mubarek out of town will be duplicated in Iran in the immediate future - Iran is hard-core, they could care less about what the world thinks of them. Ahmadinejad is a very scary guy and he is backed by people that are even more extreme. Public executions seem to be a form of entertainment for the Iranian government. If Iran gets nuclear weapons, I think a nuclear exchange becomes pretty likely. This makes me ANXIOUS.

4. Black Ice: It has been 2 weeks since Chicago's big blizzard and all of our snow is melting as temps head above freezing. But it gets cold at night, causing the melted snow to re-freeze. On roads and sidewalks, the result can be invisible - "black ice." I slipped in my driveway when I stepped on some black ice and almost did a face-plant (managed to stay upright by flailing my arms around and grabbing the doorhandle of my car). Black ice makes me ANXIOUS.

5. Unemployment: I am among the fortunate folks that kept working through the recession. I know people that have not been so lucky. The official unemployment rate in the U.S. has been 9% or higher since April 2009. But the official unemployment rate is vastly understated. If you add "discouraged workers" (folks that want jobs but quit looking due to lousy prospects) and the underemployed (folks with part time jobs that want full-time jobs), the rate is at least 20%. Oh, and don't forget all those college grads that are working fast food jobs - they are underemployed, too. And the 55 year old former head of human resources for a mid-sized company that is working at Starbucks to get health benefits - he's underemployed, too. I am a father; two of my kids are working (Praise Be!) and two are still in school. I worry about their employment prospects. Real unemployment numbers make me ANXIOUS.

Well, that is enough free-floating anxiety for now. Have a nice day.

The Day Before Groundhog Day 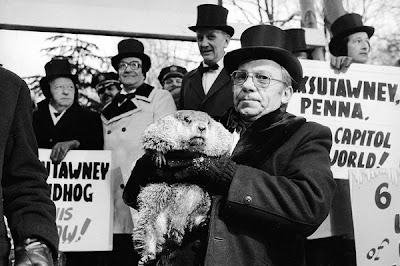 Tomorrow marks the 125th anniversary of Groundhog Day. Since my mother's side of the family came from western Pennsylvania, less than an hour's drive from Punxsutawney, I grew up with pictures of the Groundhog Day ceremony in my house. I knew all about Punxsutawney Phil before Bill Murray made the movie. Before Murray's "Groundhog Day" movie, February 2 was simply a holiday based on an old legend about a rodent's weather-forecasting ability. The movie changed the meaning of the holiday in our popular culture. The phrase "Groundhog Day" has come to represent the act of going through a phenomenon over and over and over until one spiritually transcends it.

Here in Chicago, we get that "Groundhog Day" feeling about this time of year. Starting sometime in December, the skies turn grey and often stay that color for weeks on end. We get blasted with snow and cold. The days are short and so are the tempers of our fellow citizens. It does sometimes feel like we are living the same winter day, over and over and over. Save us, Punxsutawney Phil!!

But tomorrow, my friends, will be different.
According to the U.S. Weather Service and the chattering herd of media hypesters, Chicago is to be hit with a great-grandmother of a blizzard, starting this afternoon and extending into the wee hours of Groundhog Day. Breathless disaster junkies are claiming that this could be "the big one" with snowfall exceeding the infamous "Blizzard of '67." Winds will howl, leading to white-out conditions. THE CITY COULD SHUT DOWN!!!! PANIC AND CHAOS COULD ENSUE!!!!! RUN AWAY RUN AWAY TO ARUBA!!!!! (Except O'Hare will be closed).

Excuse me, but a big snowstorm in Chicago in early February simply isn't a newsworthy event. We are Chicagoans. We have four-wheel drive vehicles, several hundred thousand tons of road salt in storage, and drink antifreeze in the winter. Snowstorm? Feh!