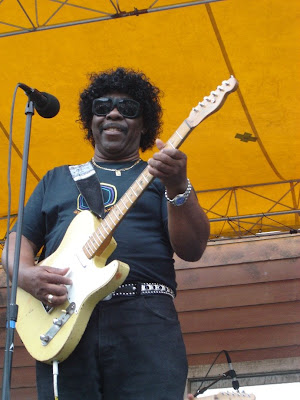 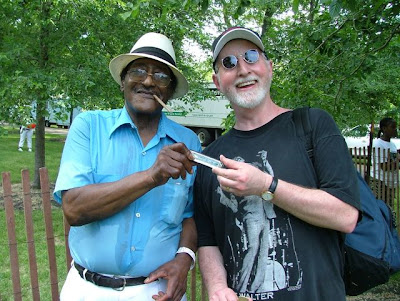 Oh, Lord, it has been a week of losses. Phil guy died at the age of 68 after his battle with prostate cancer. He was a kind, generous musician; deserving of far more recognition than he received. As Buddy Guy's brother, he faced the challenge of overcoming a close relative's fame. Phil was always pleasant to wannabe musicians like me. This is a recent picture of Phil, from the Chicago Blues Fest last June
I knew that Little Arthur was at death's door. Her had a seizure from a brain tumor in April and hasn't left the hospital since then. He was totally authentic and I had the honor of hanging out with him once in a while. The picture above is from the 2004 Chicago Blues Fest, backstage after Little Arthur's set and before my band's set. A very sweet guy...Here is what Bob Corritore had to say about him in his blues newsletter.

RIP Little Arthur Duncan 2/5/1934-8/20/2008: It is with great sadness that we report yet another passing in this terrible week of losses to our blues community. Chicago harmonica ace Little Arthur Duncan passed away Wednesday morning, August 20, 2008 at Kindred Hospital in Northlake, IL. He was 74. He had been incapacitated for months with little hope of recovery. Born February 5, 1934 in Indianola, Mississippi, Arthur moved to Chicago at age 16, where he heard and befriended Little Walter, who inspired him to take up the harmonica. While holding down a construction day job, he began performing around Chicago with John Brim, Floyd Jones, and Hip Lankchan. He would later own and operate the Artesia Lounge on Lake Street, which moved to West Madison Street and reopened as Backscratcher's Social Club. Owning a club gave Arthur a regular place to perform, and he became a popular neighborhood attraction on the West Side. Twist Turner produced some of Arthur's first recordings, which appeared first on cassette and then on Cannonball Records' Blues Across America series. As Arthur's stature grew in Chicago, he recorded more, cutting two beautiful CDs for Delmark (Singin' With The Sun and Live At Rosa's Blues Lounge), and one forRandom Chance (Live In Chicago). He was a simply great vocalist, with tremendous power and expressiveness; and his sparse harmonica was always on the money. He specialized in third position and chromatic harmonica. His final band included Illinois Slim, Rick Kreher,and Twist Turner. He had a warm and gracious personality, and his passing leaves a huge hole in the Chicago blues scene, as he was one of a handful of the dwindling old school harmonica masters. We will miss you, Arthur.