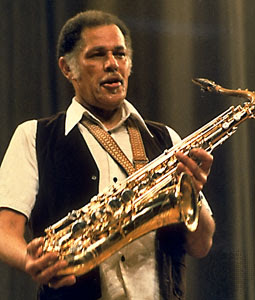 I sometimes get a little stuck - maybe a family member isn't doing well, or I suffer a financial setback or the accumulated stress of single parenthood drags me down.  When that happens, I pull the Dexter Gordon playlist out of my iPod.  Dexter fixes bad moods, you see.

He was a very tall man - 6 feet, 6 inches tall.  He did not scuffle as a kid - his father was a prominent African American physician in Los Angeles who looked after patients such as Duke Ellington and Lionel Hampton.  Dexter started playing when he was 13 years old; by the time he was 17, he was in Lionel Hampton's band.

Dexter is my favorite tenor saxophonist.  He never over-played.  He had the instrument completely under control and had all the technique in the world, but he never flaunted it.  His tone was large and round, he hung behind the beat by a few micro-seconds; this somehow made everything he played more emotional and deep.  He had a tendency to slide up to higher notes; he used vibrato sparingly, but  perfectly - it always enhanced his art and never created a distraction. He could swing so hard, and he had conquered all the intricacies of be-bop. But his ballads would rip the soul out of your body.   He was a major influence on John Coltrane, but I don't think 'Trane matched Dexter's lyrical magic.  He was a natural - threw down an Oscar-worthy performance as Dale Turner in "'Round Midnight" in 1986.  Here is version of "Body and Soul" from that film.

When I listen to Dex, I feel a space opening up in my chest, pressure and gloom dissipates.  I can't explain it.    He was a poet of the jazz saxophone.

Dexter Gordon died of kidney failure in Philadelphia 23 years ago.  He was 67.  He was playing almost to the end.  At his memorial service, there were no eulogies or prayers, just great music from a group of Dexter's fellow jazz musicians, led by the great trombonist and Dexter Gordon collaborator Slide Hampton.  This is what Dexter requested.

This past February 27 was the 90th anniversary of Dexter Gordon's birth.  The world is a better place because he lived and picked up the saxophone.