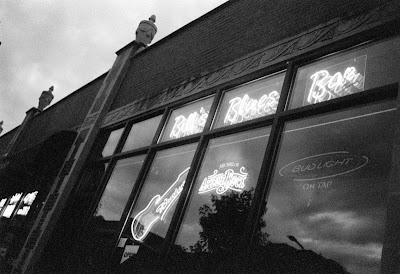 Back in August 2003, the first "real" blues club in Chicago's northern suburbs opened its doors. On November 10, 2009, those doors closed for good. Bill's Blues Bar is another failed small business.

Bill Gilmore, the leader of the club, deserves respect for his determination and grit. Lots of people invested money and time into the club (including me). The club never did well; it was always barely hanging on. Over the past few months, things got worse. While the recession played a role, the primary culprit was accumulated desperation - as things got tougher, service deteriorated and fewer customers came out - it was a spiral.

Bill Gilmore brought big-time blues to Evanston IL. James Cotton, Son Seals (RIP), Magic Slim, Rod Piazza, Lurrie Bell, Big Time Sarah, 'Lil Ed and the Blues Imperials, Eddie "the Chief" Clearwater, Melvin Taylor and the Slack Band - just to name a few. Bill's Blues Bar is also where my band, Mr. G and the Mystery Band, was born. We are coming up on the 6th anniversary of the Mystery Band's first gig (on Thanksgiving). Bill's Blues played a significant role in the development of my blues harmonica addiction.

I am sorry to see the club go, but I never thought it would stay open for six years -I thought it would be gone in 36 months. So it was a valiant effort. Think good thoughts about Bill Gilmore, and go out to hear some live blues in your community - if you don't, the clubs that present these acts will all die.